I was watching The Great Hack the other day. In essence it’s a documentary looking at how third parties, specifically Cambridge Analytica used data on individuals to shape public opinion, even going as far as having an influence, if not complete control, political votes and elections across the world. See the full trailer here. It’s unnerving stuff, mind Facebook and social media aside, thanks to the growing popularity of my blog a Google search for my name (which used to pull nothing linked to me at all), now gets this:

(Contrary to some of the images in the top 14 I am still alive.)

For the most part these are images coming from this blog (public), Twitter (public) and LinkedIn (public). Further down my Instagram profile starts cropping up (public by choice, my account is a laugh a minute). Seeing a theme? I don’t have a problem with it, but it’s interesting that Facebook doesn’t seem to factor when it links to my very public Facebook page for this blog.

Watching The Great Hack I felt fairly confident that Facebook or other sites couldn’t possibly be harvesting my data or at least not harvesting it to any great use. During the run up to the Brexit referendum in 2016 I saw no specific content linked to the vote and right now I’m getting a number of adverts for razors, shaving foam (a bit harsh Facebook) and Laughing Cow cheese. I didn’t like Laughing Cow cheese when I was five years old, why would I like it as some kind of snacking cheese now?! Hand me the brie, real girl’s gotta eat.

So I went to bed that night thinking I was safe, only to have a weird dream…

It was a sunny day in Stratford (Upon Avon), I think it was a Saturday. I came across two European school kids with a Tesco trolley down Henley Street. And we were outside a Costa and WHSmith (which is nuts because Costa and WHSmiths are no where near Shakespeare’s birthplace which happened to be a couple of doors down from where we were). The kids wanted to find a Boots store so I told them to try the Costa instead(?) for whatever it is they wanted, I think it was souvenirs. And I told them they had to cover the shopping trolley in fake tan(?!) so the three of us were desperately trying to cover this Tesco trolley in fake tan, but oddly enough the tan kept spilling through the gaps.

Then my sister, India, said “Alice, we need to photo this trolley” in a really aggressive way, like I should have known this already. Suddenly we’re on a South Devon cliff edge, facing into Coleton Fishacre gardens (which is nuts because their box gardens are located no where near the cliff edge, duh Alice!) But we needed to photo the trolley and get one of the kids in shot as well (the other child I think went off to Starbucks in the meantime). And then the child said he was going to push the trolley, with the fake tan, off the cliff and he started dancing around the edge even though there was a skull and cross bones sign right there. I was yelling to India to hurry up and photo the trolley because the sharks were coming and I didn’t have the right insurance(?)

But India was too busy debating the colour of jelly fish with some National Trust members in the shop. And I kept yelling “the pirates will take the trolley!”

I woke up at that point and spent the next two minutes convinced that the whole thing had happened and that the National Trust were going to send the police to my house. Nothing screams a woman who is old before her time more than someone genuinely concerned over the wrath of the National Trust.

(And this is why data harvesting doesn’t spook me, because I just hand personal, unnecessary, insights to the world on a plate.)

Things Escalate Quickly When you Buy From the Chinese

With this in mind I was on Wish the other night. Wish is a shopping app, owned by an American firm, but a site which is filled with sellers based in China offering items for sale at supposedly lower prices than UK shops. The catch? Delivery takes forever and additional postage charges hike up the overall price.

On Wish you can buy clothing…

It really is the ‘anything and everything’ shop of the internet. Never do you go onto Wish looking for a specific item because nine times out of ten you won’t find it and the tenth time you’ll have also bought an aquarium tank for fish you don’t own.

I was having a scroll through when a particular image made me stop abruptly. I opened it up to get a better look at the product.

Now those who see me often enough will know I like my dresses, I wear them pretty much every day. If you’re wearing dresses in the United Kingdom then you’re going to be getting through a lot of tights. But never have I stood in a shop and found myself wondering “hmm, will these stand up to having a cat thrown at them?”

And then, because I’d opened up one listing which featured tights, Wish quickly directed me to another.

‘Tights’ isn’t even mentioned in a product which opens with ‘Pineapple socks’. Again, I’m not really sure if the Chinese know what people are looking for in hosiery.

Then Wish went a bit mental. Because by now the data harvesters of the web had clocked on that I was looking at a particular type of product but not buying. Never had I been bombarded with so many options for all the things I could do with (or in) a pair of tights.

…this one reminded me of a classic clip from the mockumentary Summer Heights High where Mr G delivers a performance to his class dressed in a bag (skip to 1:17).

And then the concept of hosiery tights translated into something a lot darker than I expected. I mean, with ‘pineapple socks’ at least the app understood part the requirements of tights, that they were everyday items. Mind, I don’t know what kind of algorithm I would think I’d class this as ‘everyday wear’…

It also made me wonder if they’d tapped into the blog by this point and seen the post where I admitted to wanting to be Britney Spears as  a kid.

My feed was suddenly full of things which, quite frankly, I didn’t want to be seeing whilst watching Antiques Roadshow on a Sunday night with my dinner.

And I’ll be honest, this was the tamest screen shot I could get. The terribly photoshopped cat says it all:

I showed my friends what my innocent click had brought about. “Sure” they said, “sure you accidentally got these kind of tights as recommendations…”

Needless to say the app has now been very much deleted and left me defaulting back to the safe and security of making purchases from places where the website/shop assistant won’t instantly suggest I visit Ann Summers. That said, given the products from Wish are coming from Asia it now means governments now have more than enough information to completely own my soul and do goodness knows what when I’m a mega famous superstar (why are you laughing?)

Want to read another crazy dream I had? See the screenshot below from the first draft of this post. I kept it because I found it rather amusing how the dictionary function on Chrome suggested the correct spelling of Zuckerburg was Beefburger. 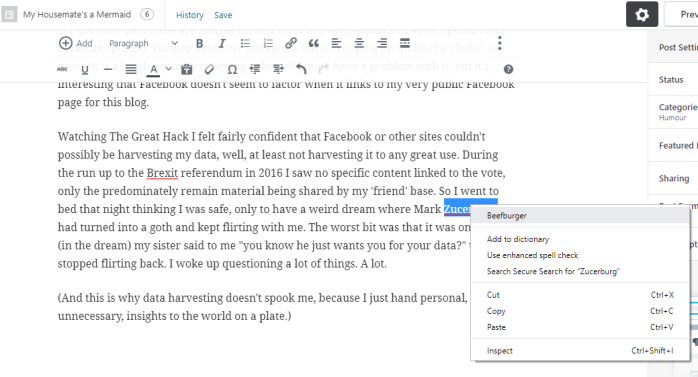 Did you enjoy this content? If so, please buy me a coffee to show your thanks by clicking this link: