So, I’m minding my own business the other day, working from home (as per usual), when I go into the kitchen to grab a coffee and spot this in the garden.

Having a spare minute or two between meetings, I pop outside to take a better look.

Just as surreal an explanation as expected. But still.

I went back to my work laptop and assumed that would be the end of that, that nothing would come of this Robinson Crusoe pheasant trap.

And a little time later still…

Shaking my head with disbelief, I bring myself back to my laptop to try and actually get some work done.

“Alice, come with me to drop off this pheasant,’ Papa B says.

“Well then, hurry up and get your shoes on.”

(Classic family reaction to anything of the sort. Cotswold drama > work.)

He loads the car up with the wheelie bin:

And off we go to calmly release the bird into a wooded spot up the hill.

And now, for the big finish.

We drive back down and I get back into the house just in time to join my work meeting, nobody any the wiser of the craziness that has just gone down.

What can I say? Lockdown just got weirder.

(Important disclaimer – no animals were harmed during this process. The pheasant was humanely released into the wild, flying away without injury. We stayed for a short while after the release to be certain of the animal’s welfare. He was long gone, in fact a week later the peasant actually came back. So there you go, what a success that turned out to be.)

Please support unpaid writers, like me, by donating to my funding page:

Ko-Fi (Formerly Buy Me A Coffee)

The Pubs Are Open!!

It’s Not You, It’s Me…And My Editing

The Cotswolds are a beautiful part of the world. Rolling green hills, golden stone brickwork and chocolate box villages make it one of the most desirable tourist destinations within the UK. It’s also a large region notoriously hard to pin point.

According to this map Swindon and Evesham are in the Cotswolds which frankly is the funniest thing I’ve seen all day.

Who better placed to review North Cotswold attractions than someone raised in a border village? After all, no one goes on holiday to spend hours in tourist information centres.

10 Things you Simply must do in the North Cotswolds

This little market town marks the most northern point of the region and typifies a lot of the features you’d expect to find in a place that made its wealth in the wool industry.

Chipping Campden has been able to retain vibrancy in its little independent shops, pubs and coffee houses spread along the main high street and having attended secondary school in this sleepy town I can certainly vouch that it’s worth a couple of hours of anyone’s time. During school holidays you can park in the school’s car park or, if you can’t park along the street, there’s a small pay and display car park in the centre.

Linked to the above, Chipping Campden is one town that sits on this popular walking path. On this one I won’t compete with the multitude of books and websites (there’s plenty of information out there) but I would encourage anyone visiting the area to tackle a shortened route or section.

Representing the highest point and one of the most iconic Cotswold symbols, Broadway Tower gives the best views for miles around. Don’t be fooled by the title though, this charming folly is located a short drive away from the market village of the same name, that said the hillside has considerably developed in recent years enabling visitors to linger a little longer and treat themselves to stylish interior buys and coffee in the converted barn.

If views aren’t your thing there’s also an underground nuclear bunker on site which is open to the public on weekends during the summer period (April – September). Closed in 1991 but restored to its 1980 appearance, it’s one for Cold War era fans.

Worth noting that this site gets busier during peak times (e.g. summer and weekends) and while fairly substantial the car park does fill up. Given the hillside bumps that sit alongside the tower, sheep are sometimes let lose to keen the grass trim resulting in lots of ‘little presents’. For both reasons sensible footwear is recommended.

Top tip: You can pay to go into the tower itself where a brief history of the area and exhibitions are presented. At time of writing tickets for adults are £5. My advice? Save the money and invest in coffee and cake at the tea shop. 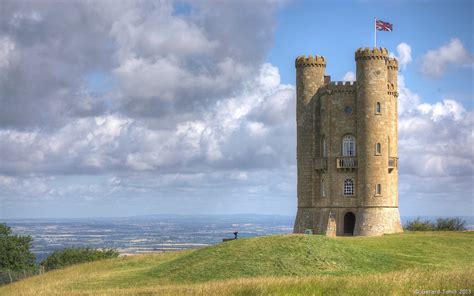 In many of the fields near Broadway Tower you’ll find the purple shrub growing in large quantities, spoils of which go into making the popular scented products sold by the Cotswold Lavender company. When the lavender is in season a visit to the farm is an experience for all the senses.

In a rush? If the lavender is in full bloom make the effort to drive down the country lanes that cut through the crops. The intensity of fresh flowers combined with a gentle breeze is something you won’t forget in a hurry.

Take a map and a basic idea of where you want to go and just drive. There are some beautiful Cotswold lanes and undiscovered hamlets to be found across the North Cotswolds and, better still, the roads are all of solid quality and easy enough to spot (even if they’re not always signposted well).

If you want to really experience the Cotswolds you have to avoid the well trodden path. Everyday large numbers of coaches take visitors (from the UK and overseas) on day visits to the main destination towns. Popular towns are popular for a reason and in peak season it’s not uncommon for individuals to come away feeling disappointed with the experience they get at such places. My advice? Ditch the crowds and gain a unique experience by going for a scenic drive. Who knows, you may even discover a location or pub you go back to later on.

Word of Warning: the unique experience will also mean a lack of mobile phone reception and make sure the tank is full of fuel before setting off (petrol stations are not a common sight in the rural Cotswolds).

My family home is quite literally at the bottom of the hill so I’d be foolish to not give a mention to these world famous gardens, both of which are neighbours. That said, having spent my entire life living in the shadow of Hidcote my opinion on the gardens themselves are a bit mixed (personally I think there’s a touch of Emperor’s New Clothes about them). I do however respect their popularity and historic value and would always encourage people in the area to visit either Hidcote or Kiftsgate (or both) because they are a big deal and a ‘must do’ if holidaying.

Hidcote is free to National Trust members, Kiftsgate has an admission fee. As per a lot of attractions these gardens get busy so my advice would be to go early and on a nice day (if it rains there is little to no shelter). 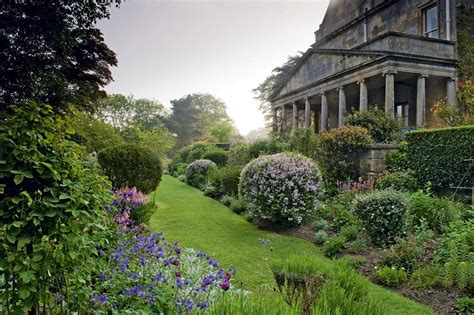 Whilst not located within the parameters of The Cotswolds, Stratford brings with it a different vibe compared to that of its rural neighbours. As well as being home to Shakespeare Stratford also has a rich history dating back hundreds of years. A quick google search will provide you with several days worth of activities.

Depending on where you’re holidaying in the region Stratford is only a short drive away and worth exploring to get a comparison. It’s also home to a number of high street shops and well known eateries during the day and stylish wine bars and dining at night.

Top Tip: Don’t kid yourself into thinking the Royal Shakespeare Company (RSC) will have a multitude of same day performance tickets available. The majority of tickets sell out months in advance so book them at the same time you book your accommodation. Also check out ‘Stratford ArtsHouse’ – a venue that has come leaps and bounds in recent years. This small theatre pulls in a number of touring comedians and plays.

8. Bourton on the Water/Broadway/Stow on the Wold etc.

Granted these places do get busy but there’s a reason for that. Heavily photographed and easily accessible, any of the above towns will be found on number of visitor check lists. Each town has their own history and charm, for example Bourton is frequently referred to as ‘the Venice of the Cotswolds’. Avoid these places like the plague on August weekends/bank holidays, but otherwise they’re worth a visit if you’re seeking souvenirs and wanting to experience the pure essence of what the Cotswolds are all about. 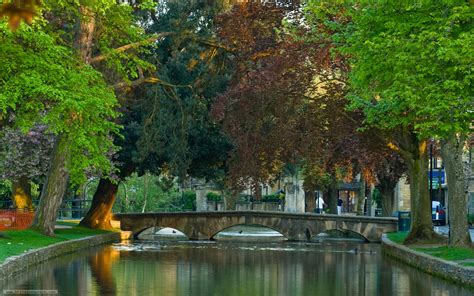 Bourton on the Water

9. Batsford Arboretum (near Moreton in the Marsh)

If you’re visiting the North Cotswolds in Autumn and not considering this as a destination then think again. Batsford is home to a large number of tree species and is coincidentally the country’s largest private collection of trees and shrubs. That aside, it’s also a great place for photography, wandering and (if kids or big kids are present) running around and letting off steam.

Located near Broadway, this National Trust property houses the collections of Charles Wade who bought the property in 1919.

The random but fascinating treasures held in this house define both the owner and period and show an early 20th Century interpretation of what the modern day rich do when money is no object. If you don’t dwell too heavily on the wealth being sourced from slave plantations in the West Indies then you’re in for an insightful experience. Each room provides a different exhibition of artefacts, it’s history within history.

Top Tip: during peak periods entry to the house is administered on timed tickets. Visit the property first before lingering in the gardens. The property itself is also a short walk away from the coffee shop/entrance which is worth noting before you set off.

Stanway is probably the best kept secret of the North Cotswolds, if not the entire Cotswolds. Only open two afternoons a week in the Summer (Tuesday and Thursday), this fully functioning family home will provide a truly different experience to anything you’ll see at a National Trust property.

Volunteers run every element of public-facing operations, from collecting tickets and acting as room guides, to running the tea shop in the converted stables. Inside is an explosion of old vs new, antique tables and tapestries coupled with modern day invoices and weekly food shops. The garden outside displays a dramatic jet fountain which rises to 300 feet (making it the highest jet in England).

Wonderfully eccentric and undiscovered to the majority of tourists (but well known by locals), this is the attraction that none of your friends or family will have visited.

And there you have it…

…some starting points for things to do in this Cotswold pocket. Of course there are a many number of other places to visit in the region (for example Bourton has a record-breaking model village and Chipping Norton is also a popular go-to destination). However I hope this list gives you a feel for the range of attractions and culture us Cotswoldians are proud to have as our own. If you want a taste of the Cotswolds (and beyond) then the North is certainly your best bet to get all you need from a relaxing mini break.

Think I’ve missed off a notable attraction? Add your comments below!

Useful Links (please note that all direct to external websites)