It has been a week since I vacated my flat in central London and returned once more to Swindon. It almost feels like the past year has all been but a dream, vape steam in the breeze. Invisible, abstract and only memorable by the faint smell it leaves behind.

On 2nd May I left London Paddington station for the last time packed like a loaded Buckaroo: an overfilled holdall case, a heavy rucksack, an additional handbag, a canvas tote filled with redundant bedlinen and a heavy laptop across the body for good measure. I learnt from my mistakes moving out and managed the travel back relatively bruise free, however my body has ached for days from strain. The day before I fully moved I’d completed a separate trip to Swindon with a similar amount of goods and wondered why I couldn’t stop violently shaking. I spilt coffee everywhere at the formal work function, of course. At the time I put it down to the amount of rushing around but now I see it as the culmination of mental and muscular stress.

Other than the short term pains it would be easy to pass off what I’d been through and achieved in just over twelve months living and working in the English capital as nothing more than normal. ‘Business as usual’ as my colleagues would say. But it isn’t. And it’s not just the big things that make me say that, like moving into the flat and travelling solo in Europe for the first time, but it is the little things as well. The events I put myself out of my comfort zone to attend, the weird obsession with finding the cheapest eggs, the men (goodness the men). And as I stood in Brompton cemetery one Sunday afternoon while a random man called Nicolas tried to chat me up I thought only one thing.

Thank God I’m writing this all down.

Seven separate notebooks, all documenting the experience of spending a year in London. Seven books with unique but different personalities as I went through a deeply personal and professional journey. Just glancing over extracts from book one and comparing it to book seven the transformation is really quite something (excluding coffee spilling and egg hunting, those two are deeply trademarked parts of me). Admittedly I haven’t read any of the books in depth since writing, I want to let some water trickle under bridges first. But I remember so clearly picking the first notebook off a shelf in a stationery store and telling myself I would make every effort to record the upcoming eight months in London (as it was then supposed to be) so that I should not forget the experience when I returned once more to Wiltshire. To ensure that I never let this fantastic opportunity turn into little more than a faded dream. And maybe, just maybe, one day I will do something more with my scribbles, that people will know about the time I ended up at a celebrity wedding, when the artist Grayson Perry became a fan of my writing, the time I got screen tested for a dating show. And again, the men.

If two things show how much I’ve changed over the past year then look no further than these separate quotes. 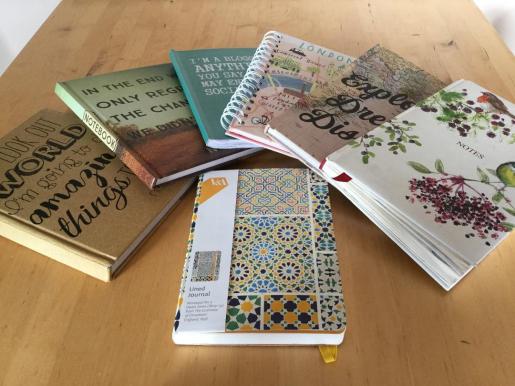 One thought on “Seven Little Books”