(View part one of my parent’s visit to London here.)

I met my parents in near the same spot as we’d parted the night before, outside a quaint little Starbucks housed in a building originally built to mark the Queen’s silver Jubilee in 1977. Not that we thought much of the buildings intended significance as we walked over the commemorative plaque in the entranceway. We took our large Americanos and admired the unusually peaceful view of the marina. Yards away Monday morning commute was in full flow, but here we were settled from the hustle and bustle of daily life. It reminded me of how days off should be spent, sunglasses in hair, enjoyable company and a mouthful of guilt-free cake for breakfast.

After coffee I led the way over Tower Bridge, stopping briefly to let Mum take photos on her camera phone. Given the frequency I utilise the tourist trap crossing the leisurely tourist stroll pace felt very much at odds with the route march, shopping on shoulder, approach I took every other day. Further along the South Bank I diverted Mum and Dad through Borough Market for an idea of how one of the main city markets looked and worked which in the same manner as St Katherine’s and Tower Bridge, was welcomed more positively for the lack of humans first thing in the morning.

West and West we went, ambling along the Southern promenade of the Thames until we reached the Tate Modern. I’d forewarned my parents about the type and medium of the exhibitions on display at this popular art gallery, but regardless they were keen to experience it for themselves. Who would I be as a local and tour guide if I ignored the requests of my guests?

Given my Father’s occupation in the Horological sphere, a trip to the worldly famous (or a least that’s what the advert said) film screening ‘The Clock’ was a must. A 24 hour film comprised of the artist painstakingly going through footage to get clips of every minute of every hour. The viewership spoke for themselves, at midday on a Monday the film screening room was about a third full, people sat in rows in front of a large cinema screen. I gestured for Mum and Dad to do the same as we walked in but they decided to remain standing on the back wall nearest to the door. We watched clips for 12:35, 12:36 and 12:37 before Dad decided he’d had enough and walked out, myself and Mum following.

“They’re all watching that film so seriously!” Dad said with amazement as we waited for the lift to arrive. “Did you see them in those chairs?”

“But don’t you see how that could be art?” I said in defence. “That someone has spent hours, months or years even trawling through footage to find a clip of that exact minute. There can’t be two 12:35s in place of zero 12:44s. The investment of time is worth something surely?”

Dad mumbled something under his breath which I took to meaning he respected but rejected my view. In a later room he made similar remarks about some lengthy pieces of brown leather that were hung from the ceiling. He defied how anyone could view this as art.

“Well what do you interpret art as being then?” Mum challenged as we moved across into a room covered floor to ceiling in printed mantras.

“Something of meaning, something of value and something I can’t do.” He gestured to the confined room we stood in, his finger ironically coming to point at one statement which read ‘stupid people shouldn’t breed’. “This is not art.”

“Well I quite like it in a weird way” Mum countered. Her acknowledgement in the face of Dad’s strong reservations surprised me, it was as if they were different people with different views. Unnerving.

After the Tate we retraced our steps and stopped off for lunch at a historic pub called The Anchor. Historic in that it’s rich history included visitations from Samuel Pepys and Edward Jenner and owned by The National Trust, modern in that it was being managed by the Greene King pub chain. Meters away from a shrine room dedicated to Jenner, city folk were chinking glasses on the rooftop terrace to celebrate successful business meetings.

“Does anyone do any work around here?” Dad commented as he reflected on the number of people he’d seen in coffee shops earlier in the day.

“It’s how they do things here,” Mum said flippantly. “It was in a copy of The Telegraph a few weeks ago, even interviews take place in coffee bars nowadays.”

For the second time in as many hours I held my tongue and sipped on my pint of cider. Was Mum becoming Londonised?

Before long all three of us were polishing up our plates and having to think of what we’d been trying to ignore all morning; that eventually my parents were going to have to get back to Paddington to catch the last pre-peak train back to the Cotswolds. Before that though there was just enough time to showcase of the City’s most iconic buildings.

“And there is Saint Paul’s Cathedral” said as we began walking across the pedestrian bridge.

“Isn’t this the bridge that wobbled when people walked across it?” Dad asked.

“Well yes, but that was when they opened it originally, it’s long past that time now and perfectly safe to cross.”

“I’m not stopping on this bridge. I don’t like bridges like this.” Mum announced as she started walking across the bridge. At first she clutched the handrail but realising that fellow tourists hogged the bar for selfies she opted instead for the London commuter approach, to storm down the middle without even pausing to look at the view. She waited patiently on the secure concrete bankside for myself and Dad to catch up and end our conversation about something so trivial I cannot remember what it was about.

“And there is Saint Paul’s” I repeated. Dad was, at first, disappointed there wasn’t the time to go in, replaced by disgust when I told him the ticket price.

“The outside is fine enough.”

Briefly stopping on a bench in the cathedral grounds we observed an Asian bride and groom having staged wedding photos done in one of the doorways, Mum and I hissed at Dad when he accidentally-purposely walked through one of their photo set ups, and then we moved on. By the time I’d shown them the restaurant location for the Channel Four reality series First Dates (which oddly got a better reception than the cathedral) we had to head back to Paddington station via the Central and Bakerloo Tube lines.

“You didn’t have to come with us back to the station,” Dad said, “we’d have been fine on our own.”

Mum looked at me from the seat almost directly opposite. She shook her head subtly so Dad wouldn’t notice and mouthed “no”. As well as seeing them off safe I had no issues with staying with them that bit longer. After all, on my day off I hardly had any other pressing engagements to attend.

I waited with my parents at the station until their platform was announced and then walked them up to the train doors where their seats were ready and reserved for them.

“Thank you so much for showing us round London these past couple of days,” Mum said. “I don’t think we’d have managed without you.”

“We’d have been fine with my map reading skills!” Dad quipped from behind.

“Thank you anyway. We’ll definitely have to visit you again.”

“We are really proud of you, you know?” Dad said as he stepped forward. “What you’ve achieved and what you’re doing, you don’t know how much it means to your Mother and I to see you doing so well for yourself here. And Wapping is such a nice place to be living. We’re just very happy for you.”

“Thanks Dad” I said, trying to not dwell too long on the sentiment for fear of breaking a tear or two. Instead I gave each of them a big hug and told them I loved them both and that I’d text as soon as I got back to the flat and that I’d visit home very soon.

They hopped onto their carriage and I turned on my heel back down the lengthy marble platform. The old-fashioned door slammed and, in just as cold and brutal a manner, our physical connection was cut.

Half an hour later I arrived at my eastward flat as they were speeding in a westerly direction outside Slough. I was wondering what to do with myself when my phone lit up with a familiar notification. A half smile on my lips, I reignited the familiar bond once again. 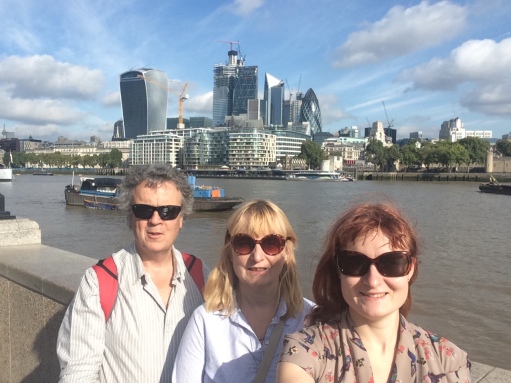