“Ah.”
“What?”
“I don’t think I’ve packed the extra pair of long trousers.”
“I left everyone in charge of their own packing, if you’ve forgotten anything you’ll have to buy it out there.”
“Can I pull over and check?”
“We can’t turn back now.”
“Please, it’s starting to play on my mind. I’m not sure if I packed them or not.”
“No.”
“Mum, just let him pull over. I can’t take the suspense at 2am.”
“I’m pulling over.”
“Fine.”

The Bennett holiday had begun.

This time the choice location was the Greek Island of Zante, located in the Ionian Sea (fun fact – in Greek the island is actually called Zakynthos. Who’d have thought, another culture manipulating foreign words just to suit themselves?)

(Greece were robbed of their victory in the 2013 Eurovision, robbed.)

Because we were staying at an all inclusive the alcohol actually was free, free by the bottles of gallons (I wasn’t in the slightest bit smug about this). I was literally drinking wine by the pint.

In fact I wondered if Greece had the whole drinking culture nailed more than us Brits. I mean, why have one glass bottle of 750ml when you could have plastic bottles of 1.5 litres for half the price?

Anyway, back to the hotel. It had an awesome infinity pool, WITH NO CHILDREN!

And some stunning sunrise and sunset views.

Don’t ask me to explain the yellow dot on the left. Just tell yourself it’s God. And yeah, that silhouette is mainland Greece.

The hotel’s entertainment was funny but not in the intended way. The Bennett clan being very British and dry in humourous outlook, we found the various failed attempts of the hotel’s animation team hilarious. One example was ‘botched Bingo’. Having done it outside for an entire season, two members of the team struggled to set up the Bingo projector inside, constantly trying and failing to prop up the canvas on a table, followed by difficulties putting a projector into focus. It was the apparent simplicity of the task which made it comic gold. Having sat down after a 18 hour day travelling and fuelled by a couple of cocktails we were howling at the two men. Later in the week the Greek Gods would reap their revenge on us via the kids club.

“The clown and donkey are heading towards us.”

But, saying that, the place wasn’t too shabby as a whole. I had muchos Greek yoghurt and hummus every day. Even the ants wanted in on the local cuisine. 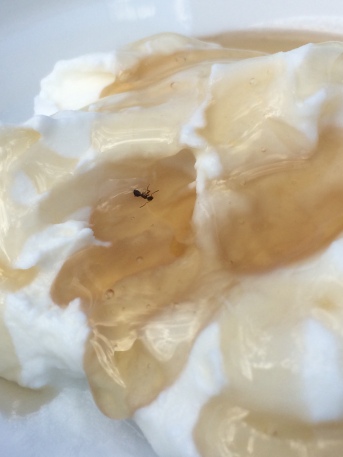 The resort’s local town was a short walk away (but then holiday reps call anything under an hour ‘short’). It contained a suitable amount of tourist tat shops, bars, restaurants and had a lovely coastal strip. It passed the ‘makes Alice look sophisticated’ qualification so all was good there.

Particular highlights of the holiday included a visit to the island’s capital town which funnily enough was called Zakynthos. There we learnt you could purchase a range of goods including turd toys and spend money in a store called Euro Shop where nothing is a Euro.

(Brexit strikes again if you ask me.)

It’s probably worth mentioning at this point that Zakynthos is NOT the place to go if you have a phobia of Turtles. It’s basically the island’s spirit animal. There are frequent excursion trips to a see them swimming about so the only logical argument we could devise is that the turtle toy reps invaded sometime around five years ago. 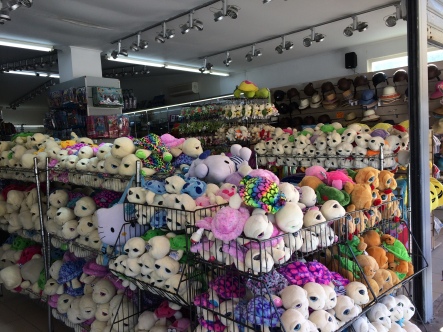 No turtle is too weird or creepy looking to be on a shop rack somewhere.

If you don’t buy a piece of turtle merchandise you’re basically damaging the local economy and may be arrested on the plane. I luckily purchased a pair of tasteful turtle earrings thereby avoiding a fate of becoming turtle food.

Jokes aside (and I won’t dwell on it too much), but outside of the shiny streets and away from the club strips and bars that get featured on all those awful 18-30 Channel Four documentaries, behind all that is actually a tourist island that is barely surviving on their limited tourist season. For every one nicely done-up street there are at least ten falling apart in the local resident districts. It makes you wonder, if this island can only just hold it together then how is the mainland coping? These people were hardly living a life of luxury. But, like I said, that is a debate for politicians and scholars to have. When they pay me to impart my pearls of wisdom I’ll spend more time writing, less time taking random photos.

The island as a whole still remembers and suffers from the massive damage caused by an earthquake that hit the island in 1953. As well as the loss of most of the island’s historic buildings, the long term damage included mass emigration, with a high proportion of residents emigrating to the USA, UK and Canada following on from the natural disaster. This royally buggered up the economies of Zakynthos and neighbouring island Kefalonia.

In an attempt to remind people of what existed in the past and preserve it for the future, Zakynthos’ art gallery holds a collection of religious art and frescos taken from ruined churches and monasteries across the island.

That said, Mary doesn’t half look scary when she covers for God on his holidays:

And I’m sorry if this is a stupid question, but why is there a cow here?

Another highlight of the holiday was a general trip around the island which took in all the cultural highlights Zakynthos had to offer. This included visiting the monastery of the island’s Saint, taking in some breath taking views out to sea (i.e. of a tourist-ified ship wreck) and a tour around the famous blue caves 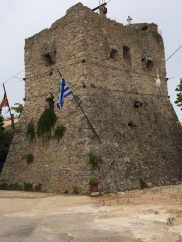 We choose to not dwell on the boat only having a couple of foam noodles in case of a emergency and the bus parking strategy. 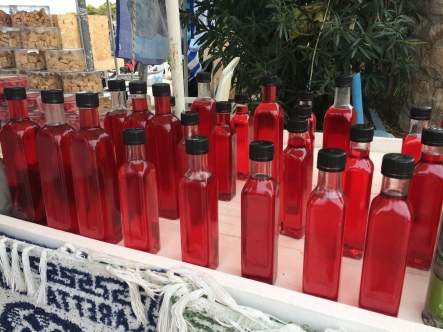 Which, combined with a hot bus, resulted in this:

You may well laugh, but we’re presently being considered to represent Greece at the 2018 Eurovision.

I used this holiday and trip out as a chance to get a selfie of the whole family – something which had only been done in the past with limited success. The difficulty was convincing Mumma Bennett round to the idea. To her the selfie stick resembled the work of dark magic.

Other than that, not a lot to report. A week of predictable sun (there’s something to be said about walking along the beach in a thin dress on October 1st), bottomless food/cocktails and the odd random conversation along the way (“do they prevent all male and female parties at Centre Parcs because they’re worried they’ll get murdered in the woods?” “…What?”)

I suppose a good gage of how well a holiday went is linked to how Papa Bennett adapts to the environment. As a comparison, he looks at lot better in Zakynthos than he did waiting for a plane at Birmingham International Airport.

And if that’s not the sign of a good holiday I don’t know what is. Well it helps if you don’t contract Swine Flu…

…And it’s also nice to get, after 500 million attempts, a decent family selfie by the sea. That too. 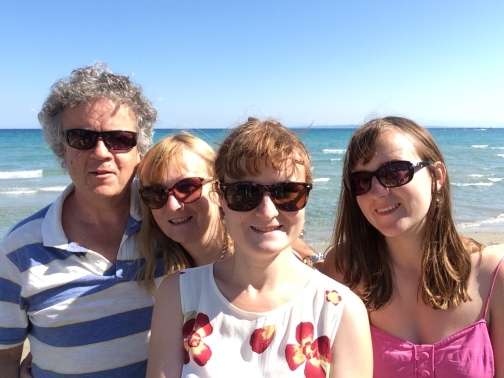