A hidden gem: Situated within Dartmoor National Park in the heart of Devon’s Teign Valley, natural and manmade waterfalls tumble down ancient rock formations to meet the tranquil lakes below, offering some of the most spectacular waterfall and woodland scenery in Devon.

A very tall waterfall, featuring a lot of climbing and (on occasion) some surreal looking wooden men. Nice views at the top as long as you don’t freak Mumma Bennett out by leaning over the edge. Plenty of old school Victorian folly lols. Not suitable for wheelchair users or those suffering with aquaphobia.

I like a sign me, especially if it’s one that covers the three important bases: 1) why am I here? 2) What are the things to keep me here? And 3) where can I go if the excitement of points one and two get to be too much. 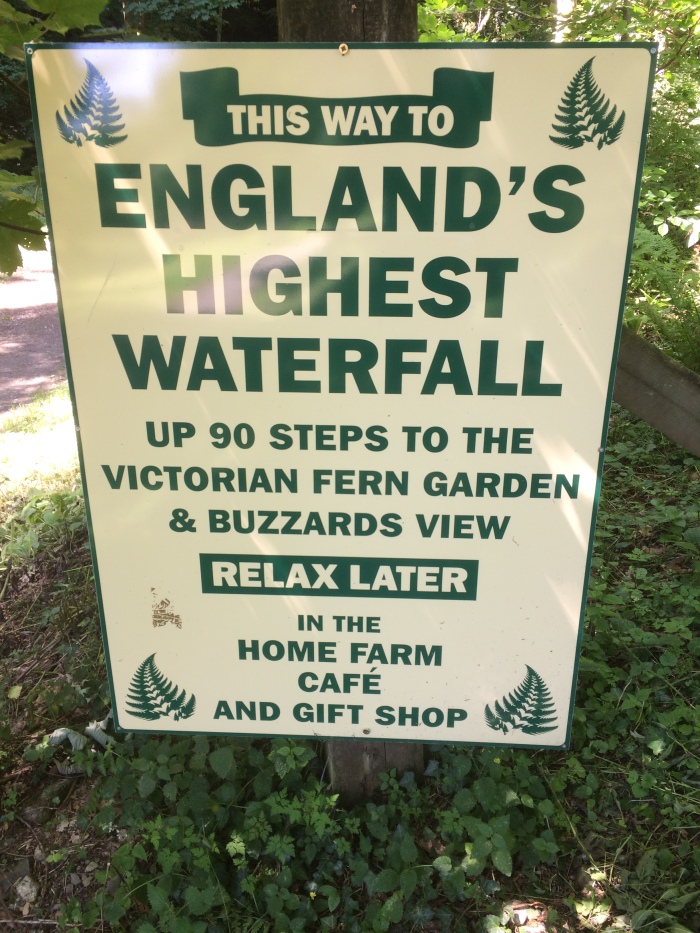 The estate is comprised of multiple lakes and two waterfalls; one natural, one man made and although the park is named Canonteign Falls, the star feature is the 70m drop Lady Exmouth waterfall which was built in 1890. The result is a very pretty cultivated area of land that would otherwise have been overlooked. 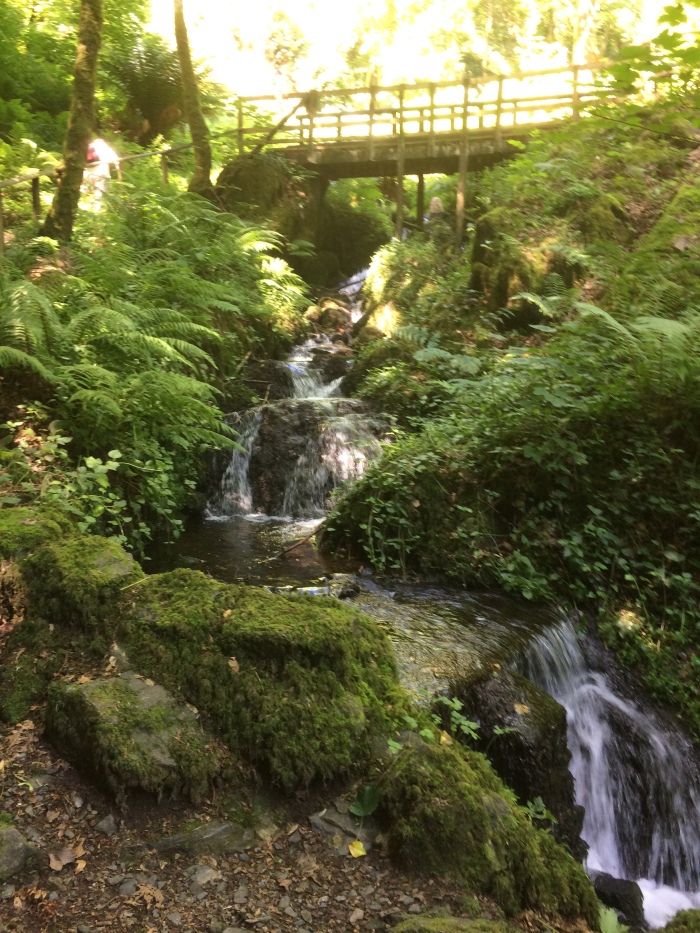 And the views from the top are stunning:

Here’s an India scale to show the enormity of view-to-human at the top of the waterfall:

Looking for a bit of hands on History? Well look no further than a merry little climb of the original 90 rock steps constructed by the Victorian creators over a hundred years ago. Just be aware that they will kill either your soul or your knee joints, just a little.

In short, it’s a rather nice Victorian folly (something created for no purpose other than to show off to your mates and say “oh how romantic!”) Lady Ex also used unemployed miners to create the Fall, so in many ways she was a real life Ross Poldark/goody two-shoes.

What Else is There?

As well as the tumbling cascades of water, Canonteign Falls also has a couple of other quaint features. For one it makes a real point of reaching out to far-right groups who have been feeling left out since Brexit. It is nice to see a tourist attraction throwing them a bone.

There are also these funny little wooden people dotted about the site. A fair bit of thought has gone into these and their positioning, this one being a personal fave:

A couple of others are a little more amusing to any grown up kids. E.g. there is the sad/possible suicidal figure about to jump into the mini waterfall with her wilted roses. 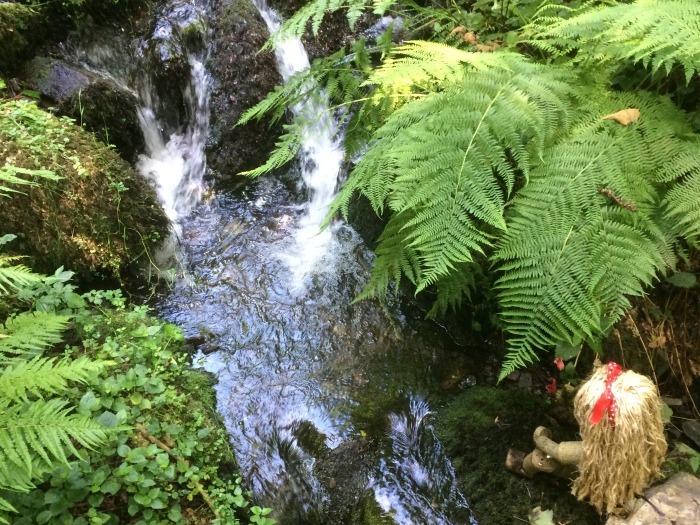 And lets spare a thought for Hobo Harry… 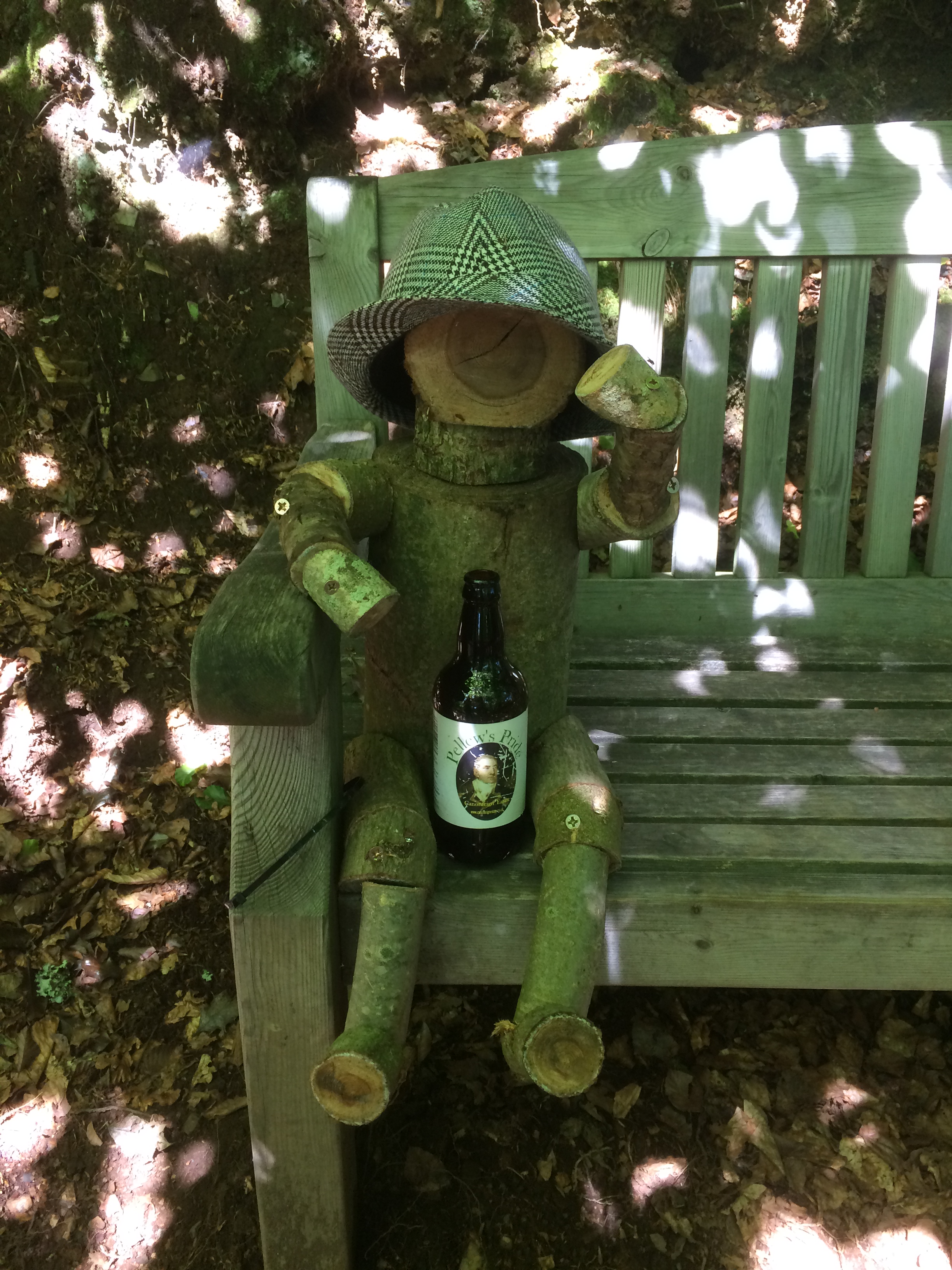 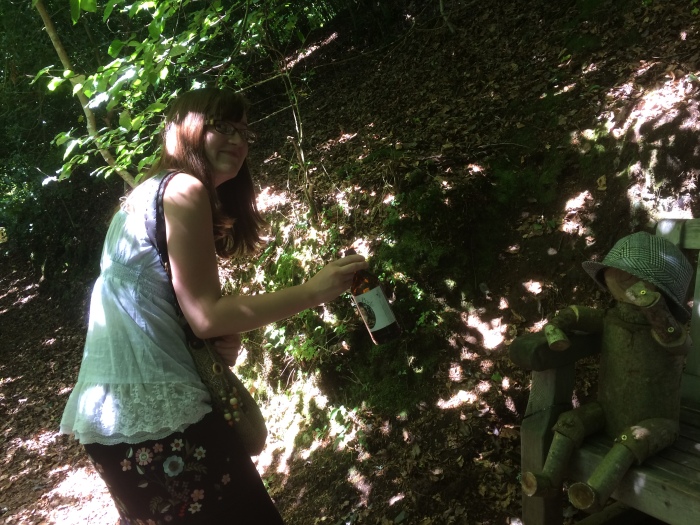 If wooden men aren’t your boat then there’s a great children’s play area full of lots of outdoor climbing frames. Not that India and I stuck to the rules, we had a go on all the cool stuff. It makes for a great thirty minutes, even if Mumma Bennett does cut off your  head in every seesaw shot.

Reminds me of something…

There’s also a Victorian fern garden. I unfortunately took no photos of this so use this clip art image and your imagination.