Skip to content
HomeAlice’s Guide to a Mediocre Christmas

And it was on hearing this Christmas call that Michael Bublé did forth arise from his slumber.

It’s taken over 2000 years, but I think we can finally say Coca Cola do not own the rights to announce when the ‘holidays are coming’. Bublé does.

Christmas is a time of caring, family and the birth of a child who’s name translates as ‘Son of God’ (not a name to be recommended if you’re only 50% sure of the paternity). Of course Christmas is also a time of chaos, family quarrels and naff gifts. At such a time it can be difficult to plan your Christmas shopping and know what to get those you love and those you really do not see the point of. You’re not looking for a perfect ‘how to’ guide, because you don’t want to be lectured on this (also because it would cost you £25.00 and by this stage of the month you’re stuffed for getting it delivered in time). You need something to cover the absolute basics but also inspire you for any last minute gift buying you need to do over the next few days. Welcome my friends to Alice’s Mediocre Guide to Christmas. Enjoy it now, next year I’ll be sticking Michael’s face on it and charging you to read it.

Introduction (the Definition of “Shopping” in this Context)

For the basis of this post we’re going to assume you’re actually going to shop. No, online shopping is not shopping, it’s online shopping. Lets be clear on that. You deserve no credit for getting the last dress in your size because you hit ‘checkout’ first. Did you have to fight other women in Range Rovers for parking spaces? Did you have to wrestle and scream at other shoppers? No? Then that’s not shopping my friend.

Before you shop it’s important to have a good breakfast. My personal preference is to go for two extremes, a bowel of porridge made of oats and water (referred to in the good ol’ days as gruel) and a caramel latte.

That way you have that slight feeling of hunger later on, but the hit of caffeine and sugar. Both will help bring out any suppressed animal instincts when you get into a busy town centre.

How you dress is often important. If you wear normal clothes you are bound to be overlooked and have people bump and crush into you. However by dressing like you have a unnatural obsession with Christmas you will find 99% of adults* will stay well away from you. 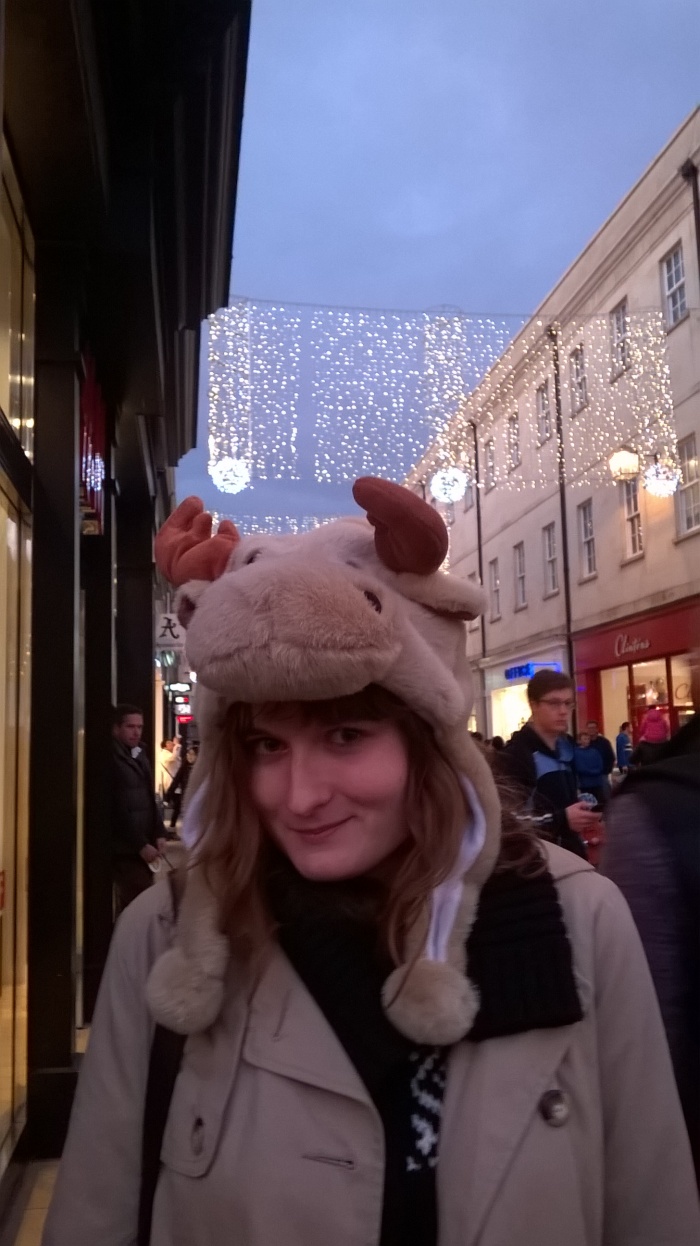 Bonus points if your sibling also adopts this approach.

Now you have double the weirdness and also a handy way of finding each other in a crowded space.

(*99% of children will stare at you with a level of awe and admiration. Be warned, for those vital seconds you will become God to them).

Shopping – What to look out for

So you’re in town, what next? Well, don’t be hooked in by sky high prices, often they are for goods that are not worth a biscuit (gift sets are the creation of the Devil, trying to tempt us to pay a small fortune for cruddy packaging). The odd shop will warn you of this before you enter their store. For instance, the clothing in Jack Wills is so over priced you will not be able to afford shoes or socks once you have made your purchase.

Keep an eye out for stores putting on sales before Christmas. As I discovered in one shop, you can really get yourself some amazing deals:

Other places will throw a lot of their time and money into Christmas displays. Sometimes these can be low budget and have a nice effect: 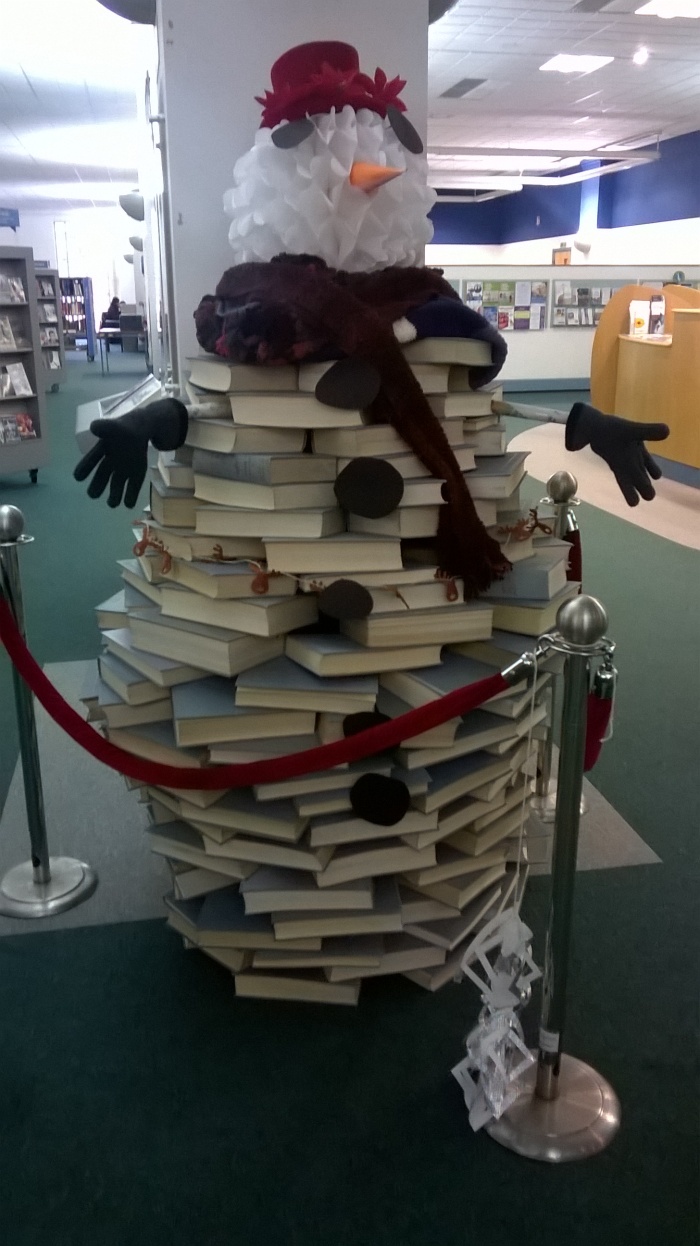 Others will create displays that have nothing to do with Christmas at all (for no explained reason):

And then others will seriously make you question the sanity of those who designed and agreed to it:

(Struggling to pick up the Christmas message in this poster found in Boots. Certainly not the Nativity scene I grew up with.)

Spare a thought for those retail/food outlets that can’t afford such displays. Some of these outlets can’t even afford grammatically correct signage.

(I do see the pun there, but it should be man‘s lunch!)

To encourage you to spend money, shops will more often than not play the same Christmas pop. If not a bit of MB, it will be this type of thing:

Although everyone love a bit of Wizzard, it can get very repetitive. Top tip: invest in an MP3 devise and plug yourself into whatever music you fancy. Even if you do enjoy the Christmas music being played in shops, having some headphones in gives you the perfect excuse to ignore market sellers shouting at you to look at their various wooden craft items. We all have a musical wooden frog with mini baton at home, we do not need another.

We all like to put a bit of extra thought into special gifts for people, but then we don’t always have the luxury of time, money and knowledge for others. The High Street is the one-stop place to solve our Secret Santa woes. Whatever can I get Sally in accounts? How about some hilariously packaged hand wash from Debenhams?

It’s so funny they won’t realise that you’re insulting their levels of cleanliness.

But what about Lily who always buys the round because she’s so nice (and loaded)?

(As seen in Peacocks)

Dean is into Star Wars, but I have no concept of what Star Wars is about or what happens in it. All I know is that it’s in space. What do I get him?

(As seen in Marks and Spencer)

We have someone new in the office who is from France, but her English is still a little shaky and our French is terrible. It would good to get her something  that we both understand. Something that transcends language barriers.

(As seen in New Look)

What do I get someone who is mad on dogs?

(As seen in Cotswold Trading, Broadway)

My friends you are welcome.

This year there has seen the welcome return of the food pun/phrase (a personal favourite last seen in the Winter/Spring of 2015: )

(As seen in Primark)

(“Jennie, I just can’t live without him, he meant so much to me. Worse still, the bailiffs are coming round tomorrow and Spot has run away.”

There are also some questionable puns out there, some are acceptable after a glass of wine:

There are also items shaped like food to look out for. But don’t be deceived, it isn’t actually food.

If you fancy something more animal based, New Look sells dead pug slippers:

(FYI before people get distressed, that’s just because of how New Look have displayed them.)

Ultimately, there is a lot of random items out there for gifting. But if you’re still struggling my personal recommendation is a mildly amusing glasses case which you do this with, reinforcing the notion that you are hilarious:

That or a top quality, one of a kind, original mug:

If you really dislike them, get them a CD from a pound shop.

“Oh how lovely, a CD of Christmas hits!”

The notion of Christmas food shopping makes me feel like the right cat on this cushion.

First off, remember which religious festival you are celebrating. In some circles it could get very awkward if you get it wrong.

There are some mild joys to be gained though from random food items which are presented differently to convince you to buy them for no reason other than it being Christmas. For instance, do I like crumpets and iced doughnuts? No, not really, more of a tea cake girl myself. But do I want these?

There are also creepy food items which should be avoided.

Food items with stories are to also to be given a wide berth. They are overpriced and waste your time. E.g.:

Wow. That was a great story Linda and Andrew. Glad I took the time to read that.

By this stage of Christmas shopping you’re likely to want to give up. But, fed up with the traditional you start searching online for something different to inspire you. Something more hipster.

(Fun fact: the year this song was released we actually had a white Christmas. So wonderfully ironic.)

Your local garden centre will be able to provide a wealth of choice and options when it comes to choosing your Christmas tree. 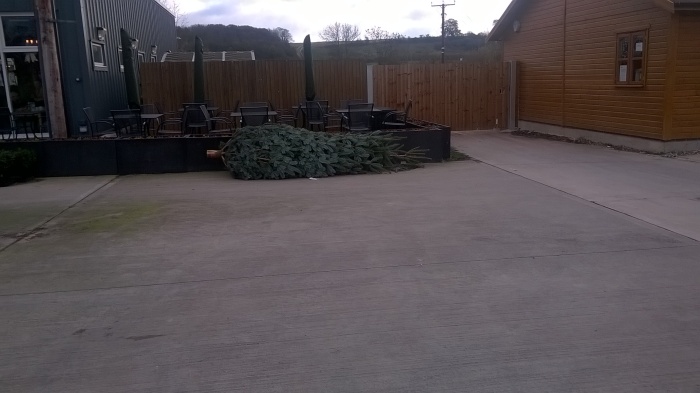 Pound shops also stock various Christmas decorations, and you will often find the store will go out of their way to make sure you can find everything you need.

By this point in your Christmas planning/shopping the likelihood is you’ll be reaching the end of your tether. Kids are screaming, friends can’t decide what dresses to buy and all your money has been spent on high quality decorations from Poundland. Something has to go. In this predicament dear readers you are not alone. Below are a selection of photos taken where shoppers have ditched one product randomly in order to buy something more essential.

A watch over clothing (lucky/unlucky neighbours).

The old “I need this to look good wearing these.”

And finally, the middle class dilemma of medication vs. a nice boxing day casserole.

So, there we have it. My quick-ish guide to the Christmas basics. With this guide you should now be fully inspired to go out there and take on Christmas with both hands and a rucksack full of used bags (cool kids never pay 5p for a bag. That’s 5p that could go towards this wonderful dish you’ll be eating on New Year’s Day…)

(I remember when they used to be only 11p. We live in a false economy.)

To play you out, I have the Bennett family song which we listen to every year. Back in 2010 (or thereabouts) India and I came across this song and history was made. Without doubt the worst Christmas song and video you’ll ever see, yet a song that summarises a lot about the British run up to and Christmas day itself. Messy, confusing, but deep down there’s a message there. Merry Christmas everyone, have a good one on me.